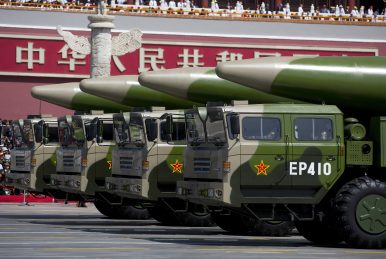 China won’t join a multilateralized INF-style treaty, but can it resist arms control?

The Intermediate-Range Nuclear Forces Treaty (INF) indefinitely barred the United States and the Soviet Union from possessing, testing or deploying any ground-based missiles – cruise or ballistic – with ranges of 500km (310 miles) to 5,500km. Its geographic scope was universal, even as pre-treaty concerns mainly centred on western Europe.

The agreement, signed in December 1987 by then U.S. President Ronald Reagan and former Soviet Union general secretary Mikhail Gorbachev, was notable for being the first to eliminate an entire class of weapons in the superpowers’ nuclear arsenals. Nearly 2,700 U.S. and Soviet Union cruise and ballistic missiles were destroyed as part of its implementation.

Today, with the treaty on the cusp of ending, following the U.S.’ formal notification of withdrawal earlier this month, there is little hope of salvage.

Since 2014, Washington has alleged that Russia developed a missile that violated the treaty. That missile has now been deployed and Russia denies that it did anything negligent.

Still, in Europe, where the costs of the treaty’s demise will be most immediate, there is a hope that INF might be saved somehow. One idea that has been mooted is to expand it rather than allow it to collapse.

If that is done, so goes the theory, Russia may destroy the treaty-violating missile and return to the INF in good standing. Another potential benefit of the proposed approach would be to bring China and perhaps other missile powers into the accord.

But Beijing has been the primary concern in such proposals. Russia itself advanced this idea in 2007, seeing in China a threat of sorts. Twelve years later, China has continued its rise and accordingly invested in its cruise and ballistic missile capabilities.

The People’s Liberation Army Rocket Force was created in 2015 to succeed the Second Artillery Corps as part of President Xi Jinping’s military reforms, underscoring the central role of missiles in China’s military.

According to public testimony by senior U.S. officials, as much as 90 per cent of China’s ballistic and cruise missile arsenal falls in the range prohibited by the treaty. In effect, China is a short- and intermediate-range missile power today. For Beijing to join a treaty like INF, the cost would be great.

Beijing has poured money into ballistic missiles in the short- and intermediate-range categories proscribed by the treaty, to enable its anti-access/area denial strategy within the so-called first island chain linking Okinawa, Taiwan and the Philippines.

In effect, scores of precise and manoeuvrable Chinese ballistic missiles can hold at risk a range of U.S. bases in the region and even threaten mobile assets such as aircraft carriers, limiting the U.S. Navy’s ability to manoeuvre and operate in wartime.

Critically, these missiles have played an important role in the PLA’s primary combat scenario for decades now: an invasion of Taiwan.

Even as the PLA in recent years has shifted its focus to the seas and to expeditionary maritime operations, the Taiwan scenario remains the top concern. Beijing’s ability to hold targets across the strait at risk rests largely on the stand-off capabilities provided by the Rocket Force’s arsenal, much of which is based within range of Taiwan.

Despite these realities, the idea of bringing China into the quickly collapsing INF fold continues to receive airtime.

“Disarmament is something that concerns us all and we would of course be glad if such talks were held not just between the United States, Europe and Russia but also with China,” she told the annual European security conference on Saturday.

China has largely remained tight-lipped in recent months on whether it would take part in such an arrangement, even as it has voiced strong opposition to America’s withdrawal from the treaty.

Merkel’s comments inspired Chinese State Councillor Yang Jiechi to respond that “China develops its capabilities strictly according to its defensive needs and doesn’t pose a threat to anybody else. So we are opposed to the multilateralization of the INF”.

Of course, China does pose a threat to a range of countries with its ballistic missiles. From Taiwan to India to the U.S. and even to Russia, concern abounds about the PLA’s fast-growing Rocket Force inventory.

China’s opposition to the INF is unsurprising given its strategic environment and interests, but there should be a reckoning that a rising China – and certainly a great power China – can no longer steer clear of arms control arrangements.

The Trump administration may not be predisposed to arms control with China, but sooner or later, Washington and Beijing will need to have these difficult conversations in peacetime.

There is a broad agenda to be addressed and it should include everything from American concerns about China’s vast conventional and nuclear missile force to Chinese concerns about U.S. missile defence capabilities.

The INF won’t be the answer to the China missile challenge for Washington, but something new could be.