How Far Does the China Belt and Road ‘Pushback’ Really Go?

How Far Does the China Belt and Road ‘Pushback’ Really Go? 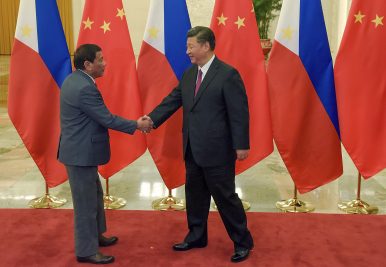 Philippine President Rodrigo Duterte, left, is greeted by Chinese President Xi Jinping prior to their bilateral meeting held on the sidelines of the Belt and Road Forum for International Cooperation at the Great Hall of the People in Beijing, Monday, May 15, 2017.
Image Credit: tienne Oliveau/Pool Photo via AP

With just a few weeks more to go until the next Belt and Road Initiative (BRI) summit China, expected in April, it is clear that the BRI continues to suffer some serious setbacks even as Beijing continues to try to lock in additional wins. Yet at the same time, as BRI continues to develop in the lead up to and after the upcoming summit, one should be wary of overestimating or misreading any sort of “pushback” against BRI. Among other things, an overly narrow focus on BRI “pushback” can distort the wide range of responses we have seen thus far from regional states; misread the motivations at play inherent in readjustments or reconsiderations countries may make along the way; and place the emphasis too much on just temporary pushbacks rather than the structural and strategic changes that need to be made to contend with how regional states can better manage the opportunities and challenges of economically engaging China.

First, though the focus is often on BRI “pushback,” that is in fact just one position within a range of very complex responses by countries ranging from support to opposition that vary on different counts including level of intensity. Emerging responses from countries like Japan, which has actively offered alternatives to China’s BRI even as it engages with it; or Myanmar, where Beijing has worked tirelessly with the government in Naypyidaw to make progress on parts of the China-Myanmar Economic Corridor (CMEC) in spite of earlier concerns, offer cautionary notes about oversimplistically characterizing responses to such a large scale initiative that involves so many different players.

This is an important point to keep in mind. A range of factors including BRI’s still amorphous shape – where old projects are at times being grandfathered in to seem like new developments and commitments by countries can be in the form of rhetorical support and symbolic MOUs rather than substantive cooperation actually followed through – means that responses will tend to be more complex and nuanced than a simple “pushback” or “embrace.” A myopic focus on just the more extreme manifestations of the pushback aspect can distort the region’s response and underestimate the BRI’s longer-term potential as a tool of Chinese statecraft.

Enjoying this article? Click here to subscribe for full access. Just $5 a month.Second, to the extent that there is “pushback,” the motivations for this subset of responses are often quite diverse, with some being more project-specific or domestic-focused rather than the geopolitical imperatives often attributed to them. There ought to be a clear distinction made, for instance, between project-specific readjustments from Pakistan with respect to the China-Pakistan Economic Corridor (CPEC); recalibration with a change in government in Malaysia following the perceived excesses under former Prime Minister Najib Razak; and the caution of a more strategic and lasting kind shown by Vietnam which continues to keep BRI at a distance.

The differences in motivations here, to the extent they can be discerned, is important. In addition to more correctly representing the myriad drivers behind why certain countries are responding the way they do, they can also shed better light on the extent to which we can expect to see continuity and change in regional responses amid various developments, including shifting domestic politics as well as Beijing’s own ongoing efforts to refashion some of its BRI projects in countries that can be expected to continue after the April summit.

Third, though countries may push back against BRI itself for now, it is still unclear whether this will also lead them to make the necessary changes to better manage such issues in the future and also limiting their broader economic relationship with Beijing as some may hope or assume. Though experiences such as the “debt traps” epitomized by Sri Lanka’s Hambantota Port or the”dual use” dilemma at play it places such as Cambodia have emerged as cautionary tales for governments related to BRI, in many cases governments are still grappling with how to address these challenges and debates and discussions about short-, medium-, and long-term steps. As they are doing so, they are also continuing to engage Beijing beyond the BRI, including through other initiatives that are more welcome relatively speaking such as the Asia Infrastructure Investment Bank (AIIB).

This point warrants careful attention in the months and years ahead. For all the focus on China, the concerns at play within BRI are also the product of factors evident in the countries Beijing is operating in as well, including a lack of transparency and accountability with respect to how project decisions are made, the perceived lack of alternatives in advancing economic development including infrastructure, and ongoing conversations about how to manage the opportunities and challenges of economic engagement with Beijing, including in some cases restrictions in certain areas such as telecommunications. Until these structural issues are addressed, individual projects may come under scrutiny, but the systemic risks will continue to remain and are likely to manifest in different ways.

All this is not to say that we ought to dismiss or underestimate the pushback we have seen with respect to BRI so far, which is real. The point, rather, is that we should avoid being carried away by headlines narrowly focused on “pushback” against the BRI and continue to pay attention to the complex decisions, motives, and longer-term adjustments being made by regional states as well as China in the initiative as well as in its wider economic engagement. That broader perspective can not only provide a better understanding of how countries respond to BRI, but also potentially help shape these very calculations over time. As we see the focus on BRI ramp up ahead of the next BRI summit in China, that is worth keeping in mind.